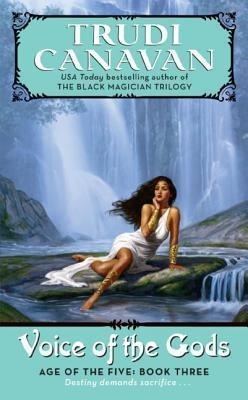 Age of the Five Trilogy, book 3; Voice of the Gods, Trudi Canavan

Unable to avoid being drawn into the terrible conflict, Auraya, now protector of the Siyee, fears she will be unable to meet the conditions of the all-powerful gods she once served. And an offer from a mysterious woman may be impossible for Auraya to refuse, but, if revealed, would brand her an enemy of the gods. Now, the immortal Wilds will not be deterred in their quest for powerful, long-buried secrets. But they have deadly adversaries who also seek the world-shattering truth . . . and it may appear in a form that no one anticipates.