The History of the Runestaff, book 2, Michael Moorcock 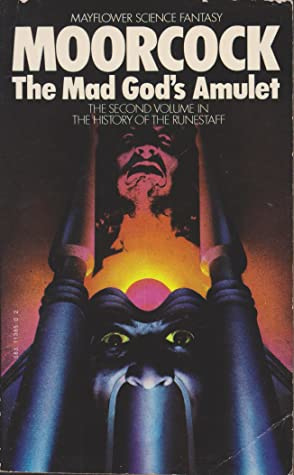 The History of the Runestaff, book 2​; The Mad's God Amulet, Michael Moorcock

In Michael Moorcock’s vast and imaginative multiverse, Law and Chaos wage war in a never-ending struggling over the fundamental rules of existence. Here in this universe, Dorian Hawkmoon traverses a world of antique cities, scientific sorcery, and crystalline machines as he pulled unwillingly into a war that pits him against the ruthless and dominating armies of Granbretan.

After withstanding the power of the Black Jewel and saving the city of Hamadan from the conquest of the Dark Empire of Granbretan, Hawkmoon set off for Kamarang, where friendship and love await him. But the journey is beyond treacherous. With his boon companion, Oladahn, the beastman of the Bulgar Mountians, Hawkmoon discovers the peaceful city of Soryandum, which holds the power to transcend the confines of time and space. This power, which keeps the city from falling to the Dark Empire, could keep Kamarang safe. But alas his love Yisselda is now a prisoner of the Mad God, whose powerful amulet is linked to Hawkmoon’s ultimate destiny: a power that began at creation and calls heroes to arms throughout existence. Hawkmoon must rip this amulet from the neck of the Mad God if he hopes to save the city of Kamarang and free his friends and his one true love from the Dark Empire's relentless wrath.